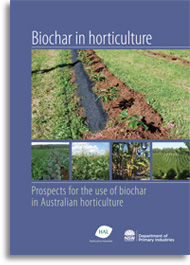 Biochar in horticulture was commissioned by Horticulture Australia Ltd to help horticultural industries assess the potential of biochar for use in their crops.

A team of experts have reviewed the scientific literature to provide up to date, peer- reviewed information on soil carbon science and policy, biochar production and risks, biochar’s influence on soils and plants, and economics of its use. The review concludes that biochar does have potential for use in horticultural production, but more research is needed, as biochar science is still in its infancy.